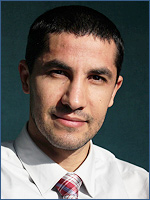 Abdennour Abbas is an Assistant Professor at the University of Minnesota Twin Cities, where he also serves as an elected member of the Faculty and University Senates.

Prior to his current position he was a research associate at the University of California (2010-2011) and Washington University in St Louis (2011-2013).

After graduating from the University of Tizi-Ouzou (Algeria) with Diplôme d’Éudes Supérieures in Biochemistry, he pursued a Master of Science in Physical Chemistry of Biological Systems at Lille University (France), and received his Ph.D. degree in Materials Science and Engineering in October 2009. Dr. Abbas is an expert in biosensors and bionanotechnology applied to biology, medicine, food safety and biodefense. He has given numerous international conferences and a dozen invited lectures and presentations including two TED talks. He is a winner of the MIT Technology Review Award-France 2013 (Top 10 Innovators under the age of 35 in France), Best Poster Awards at the Food Defense Conference (2014) and at the Nano and Microsystems International School, and a Doctoral Fellowship of the French Ministry of Higher Education and Research. He is the author of over 25 papers, one book and holds two patents. His latest work has been highlighted in Nature Photonics, KSTP TV News channel, Minnesota Daily, and other news media. He is a referee for over 20 international journals and a member of the American Chemical Society, the American Society for the Advancement of Science, and the American Institute of Chemical Engineers.