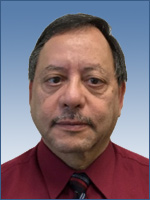 Ali Feliachi received the Diplôme d’Ingénieur en Electrotechnique from the Ecole Nationale Polytechnique of Algiers, Algeria, in 1976, and the MS and Ph.D. degrees in Electrical Engineering from the Georgia Institute of Technology, Atlanta, GA in 1979 and 1983 respectively.

Before coming to the USA he has taught at the Ecole Supérieure de Chimie of the University of Algiers and at the Lycée Ourida Meddad in El-Harrach, Algeria. He also worked at SONELGAZ in 1976.

At Georgia Tech, he was employed as a Graduate Research Assistant and a Postdoc after graduation. He worked, as a consultant, for Georgia Power Company before joining the Lane Department of Computer Science and Electrical Engineering at West Virginia University in 1984 where he is currently a Full Professor, the holder of the Electric Power Systems Endowed Chair Position, and the Director of the Advanced Power & Electricity Research Center (APERC).

His research interests are modeling, control and simulation of smart grids and electric power systems. He has secured over nine million dollars in external funding from electric utilities (Allegheny Power, Duquesne Light), US DoE, US DoD, NSF, and EPRI (Electric Power Research Institute). He has published over 280 journal and conference articles in his field of expertise.

Specifically in Algeria, he has given several conference plenary talks and he has taught a short course (one week) on Real-Time Control of Power Systems as part of the PGS Sonelgaz/USTHB in 2013 and 2015.

Dr. Feliachi is a senior member of IEEE, and a member of the honorary societies Pi Mu Epsilon (Math), Eta Kappa Nu (Electrical Engineering), and Sigma Xi (Research). He received the ASEE (American Society for Engineering Education) North Central Section Dow Outstanding Young Faculty Award in 1987, the following awards from the College of Engineering at West Virginia University: Leadership Award in 1989, Outstanding Researcher Award in 1991, 2004 and 2005, Researcher of the Year in 2005, Outstanding Graduate Teacher Award in 1991. In 1994 he received the Claude Benedum Distinguished Scholar Award for the Sciences and Technology from West Virginia University.