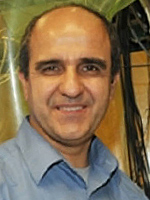 Hacene Boukari, PhD, is a Associate Professor of physics at Delaware State University. He obtained his PhD degree from University of Maryland, College Park, Maryland, while working on a 22-million-dollar NASA-funded project to design, build, and operate a high-resolution spectrometer for studying superfluids under microgravity aboard NASA Space Shuttle.

Before joining Delaware State University, he held the position of Director of Imaging at Albert Einstein College of Medicine in New York (2009-2010), was a Senior Scientist at the National Institutes of Health in Bethesda, Maryland (2000-2009), was a Senior Researcher at the National Institute of Standards and Technology (1997-1999) in Gaithersburg, Maryland, and was a Postdoctoral Fellow (1995-1997) at the University of Maryland, College Park, Maryland. He worked on diverse fields of soft matter physics, including understanding the transport properties of supercritical fluids, elucidating the nucleation and growth of silica nanoparticles, characterizing the mesoscopic structure of ceramic materials and polymeric gels, determining interactions of biopolymers, and probing diffusion of nanoparticles in complex media. His current research interests focus on developping and applying novel optical and imaging techniques combined with physics-based modeling to investigate the dynamics and assembly of various biologically-relevant proteins such as tubulin and hemoglobin as well as nanotransport phenomena in biogels and cells. Dr. Boukari’s research bridges advanced novel optical techniques and integrative nanomedicine to elucidate and quantify interactions and mechanisms of transport of biomacromolecules in their host environments, paving the way for designing diagnostic biomarkers, understanding assembly processes in biological systems, and understanding pathways for drug delivery and treating diseases.

Dr. Boukari has published more than 40 peer-reviewed papers and book-chapters in diverse fields. He was an invited speaker to many professional conferences and academic/research institutions, in particular the Materials Research Society. He is a member of several professional societies such as the American Chemical Society, the Biophysical Society, and the American Association of Physicists in Medicine; a member of the Editorial Board of Nanoscience; and a frequent reviewer of many journals. His collaborative research and eduational activities have been funded by several funding agencies (DoD, NSF, NIH, DoE).