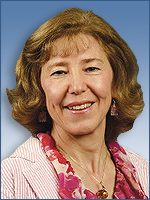 Nora Berrah is Professor and head of the Physics Department at the University of Connecticut (Uconn). She was prior to 2014 a Distinguished Faculty Scholar and Professor of Physics at Western Michigan University. She received her Diplome d’etude Superieur in Theoretical Physics from the Faculté des Sciences, Université d’Alger, Algeria in 1979 and her PhD from the physics department of the University of Virginia in 1987.

She was a postdoctoral fellow (1987-1989) and an Assistant Physicist (89-91) at the Physics Division at Argonne National Laboratory (ANL) before becoming an assistant professor at Western Michigan University (WMU) in 1991. She has been a visiting scholar at the Université d’Orsay, Paris, France, at the Fritz-Haber-Institute der Max Planck Gesellschaft, Berlin, Germany, at the Advanced Light Source (ALS) at Lawrence Berkeley National Laboratory (LBNL), the PULSE Ultrafast Center, Stanford Linear Accelerator Center (SLAC), Stanford and at the Université Pierre et Marie Curie, Paris VI, France. Her research interests, published in over 200 publications in major physics journals, are in experimental Atomic, Molecular and Optical Physics using lasers and synchrotron radiation for which she received the David. S. Shirley Award for “Outstanding Scientific Achievements” at the Advanced Light Source. Her recent research interests incorporate the investigation of the interaction of molecules and nano- systems with intense, femtosecond free electron lasers. She served/serves on the NRC/CAMOS committee, the Executive Committee of the Division of Laser Science, the APS/DAMOP Executive committee, the APS/CISA committee, and now on the APS Nominating committee. She served on the I. I. Rabi Prize Committee, served and chaired the APS/Davisson-Germer Prize, served and chaired the APS Committee of the Status of Women in Physics (CSWP), and has been/is on various review committees for NSF and DoE office of science. She has served/serves on Science Advisory Committees of ALS/LBNL, SSRL/SLAC, LCLS/SLAC, on User Executive Committees of ALS/LBNL and LCLS/SLAC. She serves on several national and international conference program committees and co-chaired the International Conference on Photonic, Electronic and Atomic Collisions, ICPEAC XXVI, 2009. She received a Humboldt Fellowship from the Alexander von Humboldt Foundation, Germany, a Chair d’Excellence from SOLEIL National Synchrotron Laboratory, France, is a Fellow of the American Physical Society and she received the 2014 Davisson-Germer Prize for Atomic or Surface Physics.